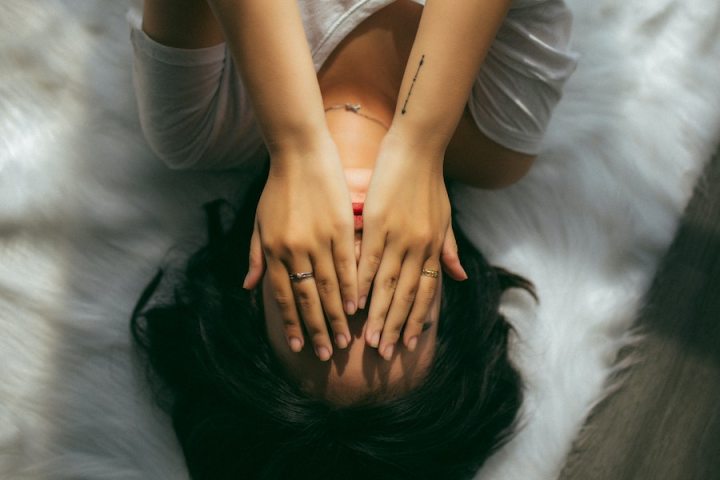 On Friday, I sat on our back porch while my daughter played in the yard. It’s been a buggy year, and I swatted away a few mosquitos before bringing everyone back inside.

On Saturday, I woke up with a cluster of mosquito bites over my left eye. They pulled at my skin and felt tight. I could tell fluid of some sort was building up underneath. Was it maybe a gigantic zit? Surely not. I put a new face mask sample I’d received on it to see if that would help. It didn’t.

On Sunday morning, the mosquito bites had spread up toward my hairline, and it started to feel like I might have gotten lice. My head was really, really itchy.

On Monday, my son said, “What’s wrong with your face? Is that a tumor?” My daughter thought maybe I’d had an allergic reaction to the mask. I kept scratching my head, kept pressing on the mosquito bites to relieve the pressure.

On Tuesday, I had my regular yearly appointment with my dermatologist, and the first thing she said to me (from across the room) is, “You have shingles.” Not mosquito bites. Not lice.

More like this: The fear of motherhood and the magic of childhood

At age 42, I never would have expected shingles. I think of that as something old people get. But of course I have it, because it’s the year 2020, and what better way to finish it out than with shingles…on my face?

Since my appointment, the nerve pain has gotten worse and the itching has increased, but it mostly comes in waves. It’s not constant. It feels like the tiny army of lice have flaming swords that they occasionally prick me with. I’ll have sharp nerve pain for a few seconds, then it passes.

The doctor is telling me to watch carefully for pain around my eye.

When I told my daughter’s therapist, she said, “That’s weird, you’re the second mom this week who’s gotten shingles.” Then, when I picked up my prescription, the pharmacist asked if I’ve been stressed. “Um, yes. It’s 2020. Who hasn’t been?” She said she’s seen a big increase of women with shingles.

This isn’t something I’d normally post on the Internet, but I’m guessing there may be other women out there wondering if they’ve also gotten attacked by a gang of mosquitos. The good news is, I caught it early. They say if you catch it in the first 72 hours, you have a better chance of quick recovery. So if you happen to have been stressed this year and recently experienced what feels like a pest infestation on your face, call your dermatologist. Don’t wait.

Photo by Anthony Tran on Unsplash

One thought on “What does it feel like to have shingles on your face? Let me tell you.”